There’s no denying that the property market in Spain has been volatile and seemingly had several ups and downs. However, one constant over the past decade is the overall improvement in the Marbella property sector, which in turn, helped bring the entire country out of deep recession. Let’s take a look at the Marbella property market, and what’s happening overall on the Costa del Sol.

It’s hard to believe that the property crash happened over 10 years ago; a crash that left the country in deep debt and horrendously high unemployment. But as the old saying goes, “what goes up, must come down, and vice versa, what goes down may bounce back up again”, we can say without a doubt that the property market in Spain, particularly the south of Spain is back in full swing.

Right now, there are more than 250 new construction projects taking place across the Costa del Sol, and around 11,000 homes (resales) for sale. The Spanish housing market from 2008 to 2019 has grown with positive results, however, it had its major ups and downs as anyone can imagine. Thanks in part to illegal building and international banking sectors not keeping watch on outsourced credit, the market declined due to an economic crisis.

Shortly after the property bubble burst and subsequent crash, there were literally thousands of homes left empty. This resulted in the value of the houses decreasing, thereby decreasing the prices of the real estate market in general. This meant very few could afford to buy a home or even pay back a loan, which led to many more homes being left empty – in turn this helped push prices down on a continuous decline.

Property Evolution, Renewal and an Interest from Foreign Buyers

Many things began to change after the crash, and after a few years, mainly between 2012 and 2014, property investors began eyeing the Costa del Sol, and Andalusia in general. The areas of Marbella, in particular the luxury market was getting lots of attention. The fact is tourism didn’t suffer any setbacks during the bubble burst. Quite frankly, a property burst bubble didn’t deter those abroad (mainly from the UK) from wanting perpetual sunshine in their lives or more seriously during holiday seasons.

From 2014 to 2016, the Costa del Sol saw a major rise in tourism, with millions alone descending on the Costa del Sol for their fun filled vacations. As you can well imagine this in turn pumped billions of Euros in the economy. From that point on we saw almost something miraculous take place in the Spain, statistical data along with new interest and property purchases saw that Andalucía alone was carrying the country out of a massive recession.

After the crisis many works and new developments across the Costa del Sol became paralysed or almost stuck in a limbo of sorts. But today, those new builds are being reactivated, with more than 250 developments pushing new homes in Mijas, Fuengirola, La Cala de Mijas, Marbella, The New Golden Mile, and Estepona…just to name a few.

Each project is driven by promoters or foreign funds, and also by local companies with their own funds or associated with other investors. That is why the Costa del Sol real estate market is attractive to different investor profiles due to its infrastructure, good communications and consolidation over time, among other factors.

What was the activity on the Spanish real estate market up to June 2019?

The international client very interested in buying on the Costa del Sol. 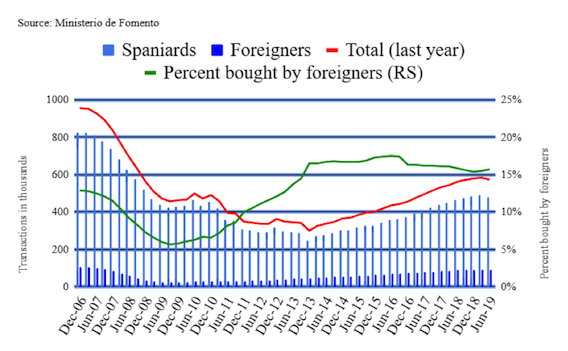 The property market in Marbella, and Costa del Sol looks set to boom. If we look back, we can see clearly why – In 2018 overall residential sales in Spain matched only 2008 levels, while the number of foreign buyers’ broke records.

On a national level, according to the Ministry of Public Works and based on the figures of the National Institute of Statistics, 2018 ended with the best results of the last ten years, with 557,919 residential properties sold (not including public housing sales) of which 50,875 were newly built properties and 507,044 sales of resale properties. These figures represent an increase of 9.4% over the previous year with a sharp upturn in sales noted in January 2019.

The greater Marbella area’s real estate market is about two years ahead of the national market and consequently slightly more mature. For example, on a national level, residential sales volume in 2018 has only now reached the crisis level year of 2008, whereas the sales volume in the greater Marbella area is now higher than the peak boom years of 2006 and 2007 as indicated in the charts.

The statistics only show the numbers of properties sold, as per the title deeds issued at the notaries, and don’t reflect the hundreds of sales of properties under construction or off-plan.

It is interesting to note that the greater Marbella area sales volume has remained on about the same level for the last five years, showing a stable market which is in the process of consolidating with none of the signs of overheating as before.

Inheritance and Gift tax reduced by 99% in Andalucía

Some of the greatest news in decades for the entire area, not only for Spanish residents but also for non-residents, which will attract new buyers, is that the Inheritance and Gift Tax was virtually eliminated by the Regional Government (Junta de Andalucía) becoming effective from April 11, 2019 with respect to spouses, children, grandchildren and parents (Groups I and II), by subsidizing the tax by 99% which serves as a control tax.

This change makes Andalusia a far more attractive destination not only for permanent residents but also for foreign investors and purchasers of holiday homes.

WE KEEP YOU UPDATED. PLEASE SUBSCRIBE TO OUR NEWSLETTER

This website uses cookies to improve your experience while you navigate through the website. Out of these cookies, the cookies that are categorized as necessary are stored on your browser as they are essential for the working of basic functionalities of the website. We also use third-party cookies that help us analyze and understand how you use this website. These cookies will be stored in your browser only with your consent. You also have the option to opt-out of these cookies. But opting out of some of these cookies may have an effect on your browsing experience.
Necessary Always Enabled
Necessary cookies are absolutely essential for the website to function properly. This category only includes cookies that ensures basic functionalities and security features of the website. These cookies do not store any personal information.
Non-necessary
Any cookies that may not be particularly necessary for the website to function and is used specifically to collect user personal data via analytics, ads, other embedded contents are termed as non-necessary cookies. It is mandatory to procure user consent prior to running these cookies on your website.
SAVE & ACCEPT
info@real-time-realty.com